Gluten-Free Irish Soda Bread is a must have recipe for St. Patrick’s Day, or anytime you want a guilt-free treat with a hot cup of Barry’s tea. Imagine a moist soda bread, loaded with plump sweetened raisins, then sprinkled with mild peppery caraway seeds and…NO regrets! Sounds heavenly, right? It tastes just as heavenly as it sounds. Now imagine that this bread takes only about 30 minutes to prepare and is so delicious that you’ll never even miss the traditional variation. You are going to want to keep this recipe on hand all year round!

This bread makes the perfect side for a Traditional Irish meal like Boiling Bacon and Cabbage with Parsley Sauce. For serving, I suggest a smear of true Irish blended butter like Kerrygold, and a drizzle of organic orange blossom or wildflower honey.

Traditional Irish Colcannon
Fluffy potatoes blended with buttery green cabbage and green onions. This colcannon dish is delicious on St. Patrick's Day or anytime of the year!
Check out this recipe

The origin of Irish Soda Bread

Irish Soda Bread is a “quick bread” that uses baking soda as a leavening agent versus yeast. This means that even though this is a gluten-free version, it can still be considered “traditional” because of the use of the soda. Soda bread is usually attributed to Ireland, however; this bread is a tradition among many countries; North America, Ireland, Poland, and Australia to name a few. Each area lends their own special touch to the recipe, adding such ingredients as honey, fruits, yogurt, nuts, and spices. I kept this recipe within the spirit of my Scotch-Irish heritage and added raisins and caraway seeds.

Irish Soda Bread is usually served as an accompanying dish to Irish Stew or Corned Beef and Cabbage. It adds a delicately sweetened touch to hearty savory meals. Because this bread is made with almond flour, which brings about a slightly nutty flavor, it also goes really well at tea time. Either way you to choose to serve it, Gluten-Free Irish Soda Bread will be a winner!

Gluten-Free Irish Soda Bread is one of the easiest bread recipes you’ll ever bake, which makes it a perfect choice for holiday entertaining. Have unexpected guests at the door? No problem, you can whip up this bread in no time, earning you the title of host or hostess of the year! No proofing, rising, or bread bowls necessary.

Preheat oven to 350 degrees and place a piece of parchment paper onto a large baking sheet. In a large mixing bowl add the almond flour, sea salt, and baking soda, whisking until all ingredients are well blended.

Stir raisins into the almond flour mixture. I chose white raisins for this recipe, however; you can use dark raisins if you prefer. You can also choose to leave the raisins out altogether, but they do add a lot to the flavor of this bread.

In a small mixing bowl add the eggs, honey, and apple cider vinegar. Whisk until ingredients are well blended. Add egg mixture to the almond flour mixture and stir until a dough forms.

Place dough onto the parchment paper prepared baking sheet and form into a flattened circular disc roughly 7-inches by 1-inch in size. With a sharp knife score the top of the disc with a cross. Sprinkle the top of the disc with caraway seeds if desired and bake for 20 minutes, or until a light golden brown. Allow to cool in the oven for 10 minutes before removing. Cool on a counter or wire rack for an hour before serving with real Irish butter and golden honey. 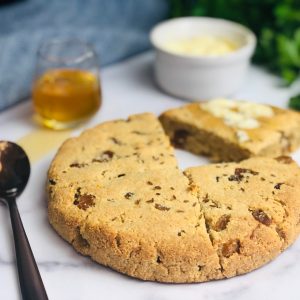 Recipe Variation:  This recipe makes a gluten-free dough that is a delicious base for all kinds of fruited breads.  If you’re not a fan of raisins, dried figs, apricots, or cranberries make wonderful additions.

Bangers and Mash with Onion Gravy 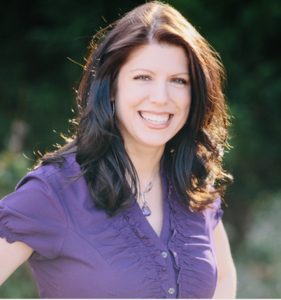