Move over Mississippi Pot Roast, there’s a new flavor-packed roast recipe in town! I created this Slow Cooker Beef Stroganoff to be the easiest stroganoff recipe you will ever cook with all the flavor of the traditional dish. Lipton Onion Soup Mix takes away the labor of onion chopping, while jarred sliced mushrooms and cream of mushroom soup take the place of washing, slicing, and sautéing. Sour cream and milk, blended with Brown Gravy Mix, create a savory sour cream sauce that makes this roast fabulously rich and absolutely delicious. Boiling the egg noodles is the hardest thing you’ll have to do to get this dinner on the table.

What is Beef Stroganoff?

Traditional Beef Stroganoff is a dish originated in Russia that consists of strips of beef sautéd and served in a sour cream sauce. There are many variations of this dish including the use of chicken, sausage, and shrimp, so feel free to mix things up and use boneless skinless chicken breasts in place of the beef. The sour cream sauce in this recipe tastes amazing on everything!

I have made this recipe a frequent visitor at the dinner table and it has quickly become a family favorite (Father-in-Law approved 😉!). I serve Slow Cooker Beef Stroganoff over buttered egg noodles, however; rice is another good option.

This recipe just couldn’t get any simpler. Everything except the butter and noodles gets tossed into a slow cooker and you come back 6 hours later to a delicious juicy tender roast. And bonus…searing the meat is not necessary for this one! 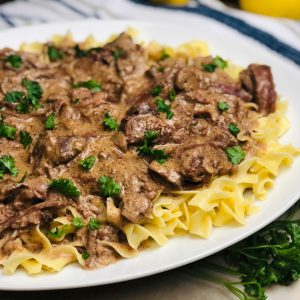 Serving Suggestions:  Slow Cooker Beef Stroganoff is best served with egg noodles or rice. Freezing Option:  This recipe is excellent when reheated.  If the recipe makes more than you need, simply freeze half for later. 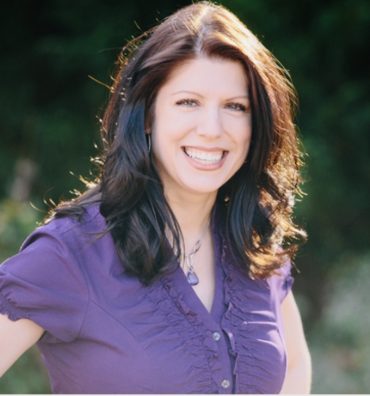